Home - A message from The Arbroath Board of Directors

A message from The Arbroath Board of Directors 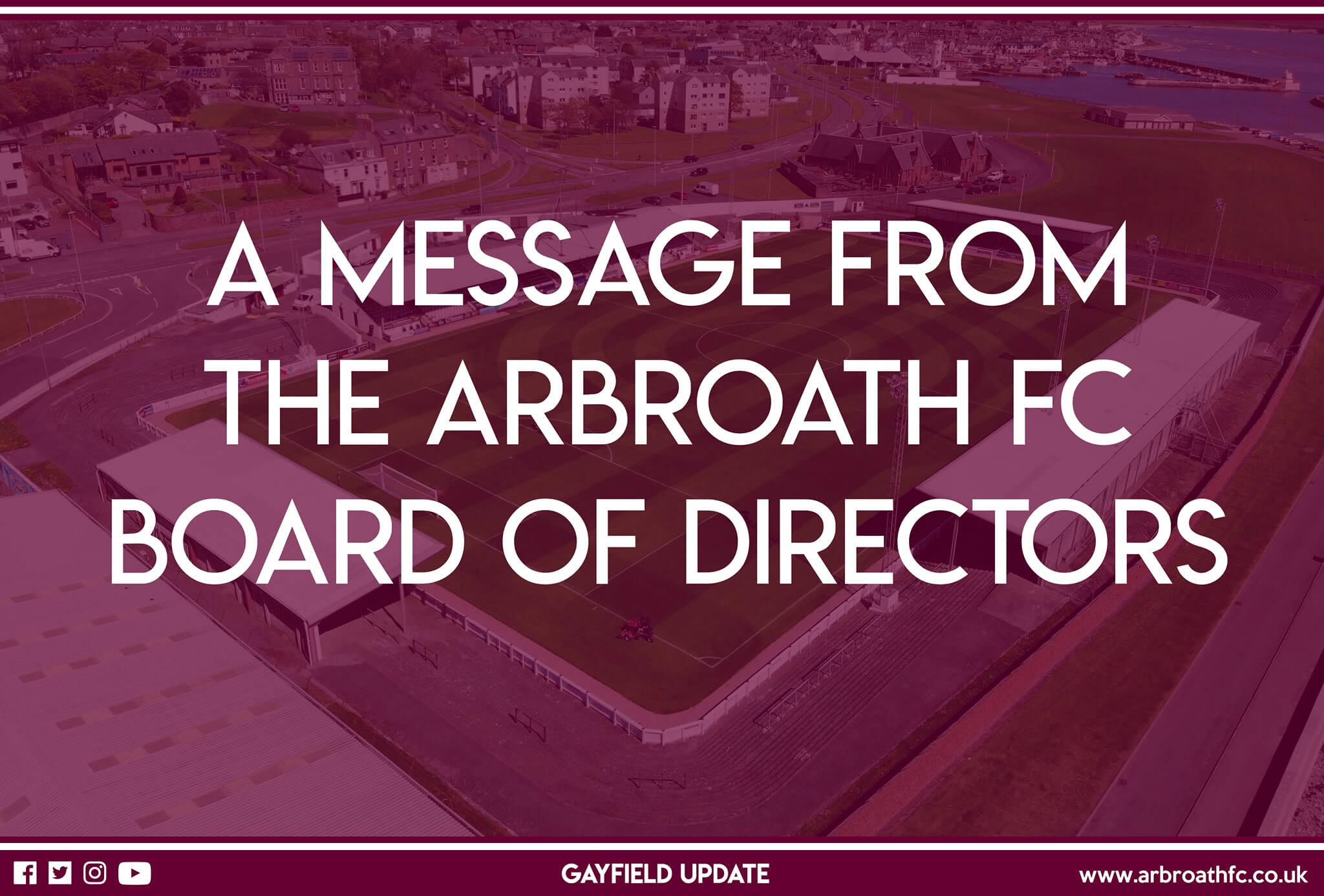 A message from The Arbroath Board of Directors

As you are all aware the Scottish FA and SPFL have cancelled all football matches across Scotland for the foreseeable future.

This falls into line with the measures taken across all social activity the world over. These are actions as a football club and as individuals we fully agree with. We want everyone to be safe and healthy.

As a football club, the current season has been one of the best in our recent history. On the back of winning League One last season, our push into the Championship has been truly magnificent with so many historic results, performances and memories already made, of course all with the backing of our loyal supporters and local community.

Being part time in a full time league has its pros and cons. Obviously most of our playing staff have jobs outside of football which brings its own pressures and with group training cancelled the players are having to train on their own, although the Management team are giving them all the support and advice they need.

With 5 home games left of the current season, we were set to welcome Inverness Caledonian Thistle, Ayr United, Dundee United, Dundee and Alloa Athletic. Not only do we lose out on 5 large gates, but also revenue from our sold out hospitality afternoons, a live TV Match, our wonderful ladies hospitality day and so much more.

These cancellations obviously do put a strain on the financial implications at Gayfield, but Arbroath Chairman Mike Caird had this message to reassure supporters.

“Despite a significant loss of income due to the cancellation of matches and future uncertainty within the game, Arbroath Football Club continues to be in a safe financial position at this present time.

We are doing our utmost to look after all our staff and players at this difficult time as like you, we simply don’t know when life as well as the football season will continue as normal.

We of course all hope it will be sooner rather than later and we will get to play our remaining 10 Championship matches.

I’ve also been heartened by our fantastic supporters who have been asking how they could support the club in these unpredictable days and weeks.

With this in mind we are reminding everyone that Shares in Arbroath Football Club can be purchased for existing, and also new shareholders at a minimum cost of £100 for 100 shares.

If you are interested in buying shares, then you can email the Club at office@arbroathfc.co.uk for more information on how to purchase.

Not only will you help the Club but you will also become a part of the Arbroath FC family.

New information will be announced on a couple of further fund raising ventures over the next few days and weeks to allow supporters to help the Club in whatever small way they choose, to help make up the financial shortfall we are experiencing.

Remember to be kind, look out for your elderly neighbours and friends, keep washing those hands, support our local businesses and continue to support the Lichties!”